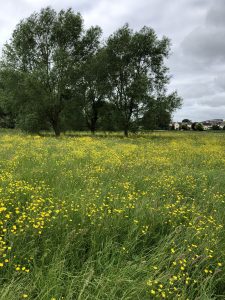 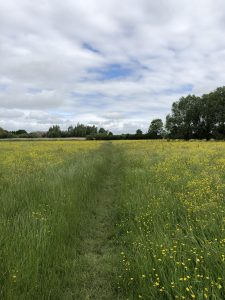 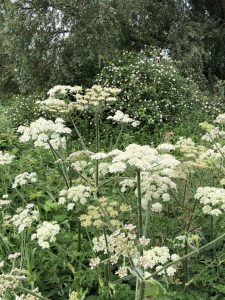 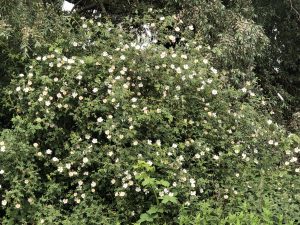 The buttercups have turned the Avon Meadows to fields of gold and many of the shrubs and flowers are in full bloom including the wild rose and giant hogweed.  The verdant abundance  of the floodplains is in full force today and I’m feeling very excited after my site visit this morning.  We finalised the location of the main fleece drawing (which will commence on Monday 21st June  – summer solstice) which will be in the south meadow just beyond the first set of willow trees and also the location for the workshop drawing which will be closer to the boardwalk that runs along the top of the meadows, to enable easier access for participants.  As we walked through the meadows a beautiful white swan flew overhead and landed close to the river.  The sheep fleece was also collected today from the local farmer who grazes his sheep in the meadows so there is an abundance of materials too. 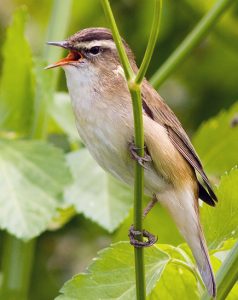 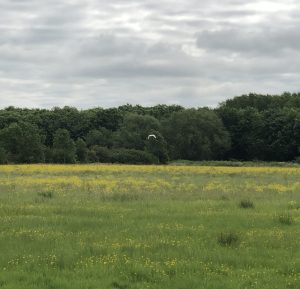 I’m looking forward to seeing the drawing that will emerge during the days of making commencing on the 21st and to see its final form and dynamic when we get an aerial photo via the drone.  For the workshop I’m currently researching the native birds such as Sedge and Reed Warblers which could be drawn in outline using the local fleece for the workshop participants to fill in using foraged reeds and grasses/flowers from the meadows. 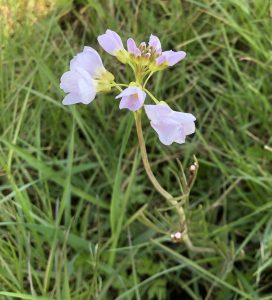 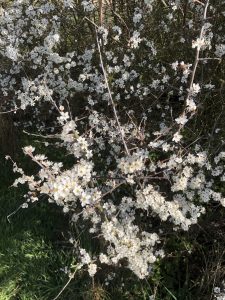 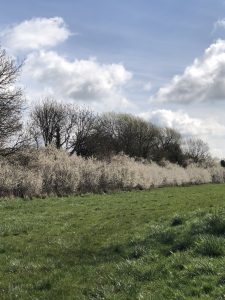 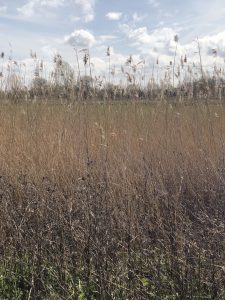 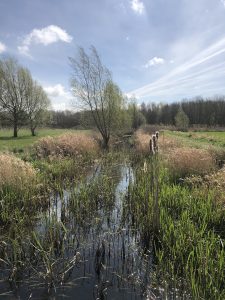 Today’s site visit to Avon Meadows saw the meadows fully emerged from their wintery sleep since the last site visit earlier in the year.  Spring was fully in bloom – the sun was shining and the flowers shooting up from the meadow floor – this stunning cuckoo flower or Cardamine Pratensis (pratensis being Latin for ‘meadow’) was in bloom throughout the meadows, its also known as lady’s smock or mayflower.  Liz from Wychavon District Council accompanied me around the meadows and imparted much of her environmental and ecological knowledge about the wildlife and habitat at the meadows.  The cuckoo flower plays host to the Orange Tip butterfly which lays a single egg just below the flower-head allowing its caterpillar to feed and thrive once it emerges.  The whole site was thronging with birdsong – many warblers including the cetti warbler and sky larks. The blackthorn bushes were in full blossom and the many willow trees amongst the meadows were laden with catkins.  A truely beautiful day to meet and walk the meadows and plan for the forthcoming drawing and workshops.

We have provisionally decided to bring the drawing and workshops forward to mid-June to hopefully coincide with the summer solstice w/c 21st June, which will bring an added resonance to the work.

I love observing the transition of a particular place through the seasons and its various life cycles which helps me to understand the land and its wildlife in more depth and to gain a greater sense of place and connection with it. This all assists in establishing a relationship with the land which makes for a more fluid re-connection when the day of making the drawing arrives. 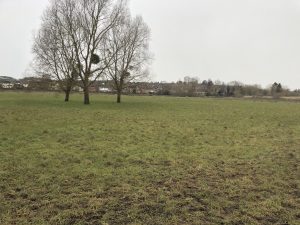 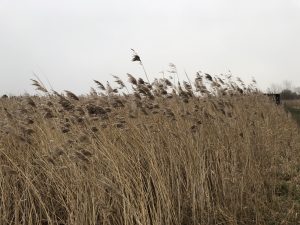 In association with Meadow Arts  I am working on the Avon Meadows Flood Plain Project in May/June this year.  Its a project involving two other artists, Andrew Howe, Melanie Woodhead being commissioned to create a series of artworks with the community, to reflect the seasons and capture the changing environmental conditions and biodiversity of Avon Meadows, Pershore.  Avon Meadows Community Wetland was created in response to the catastrophic floods that hit Worcestershire in 2007.  The nature reserve comprises of 24 hectares beside the River Avon, close to Pershore town centre.  Originally flood meadows, a series of flooded scrapes and reed beds have since been created as a haven for wildlife.  The Wetland performs an important function as it takes surface water from the nearby housing estate and provides a natural means of improving the water quality before it enters the river. 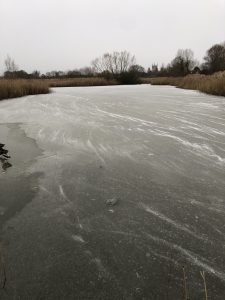 When I visited the site earlier this year it was on a bitterly cold day – the ponds were frozen and ice-covered and the wind was biting.  The large area of low lying meadow bridges the residential housing towards the edge of town with the calm and peaceful stretch of the river Avon which is flanked by trees on the other side. 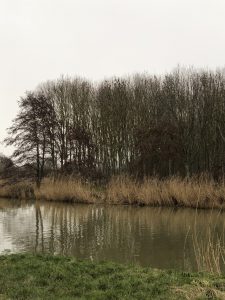 The southern meadow potentially seems a great place for the main drawing (which will be made with locally sourced sheeps fleece)  very flat and close to the river. I love the arched stems of the tall, rising reeds as they bend to the elements of wind (air) and water they are exposed to and I can feel a sense of excitement at the prospect of witnessing these aspects flow through the work as it emerges. Seeing the many different birds that inhabit the meadows is giving me much inspiration for a community workshop piece that would involve foraging from around the meadows to fill in a themed land drawing possibly of some of the wildlife that inhabits the flood plains. 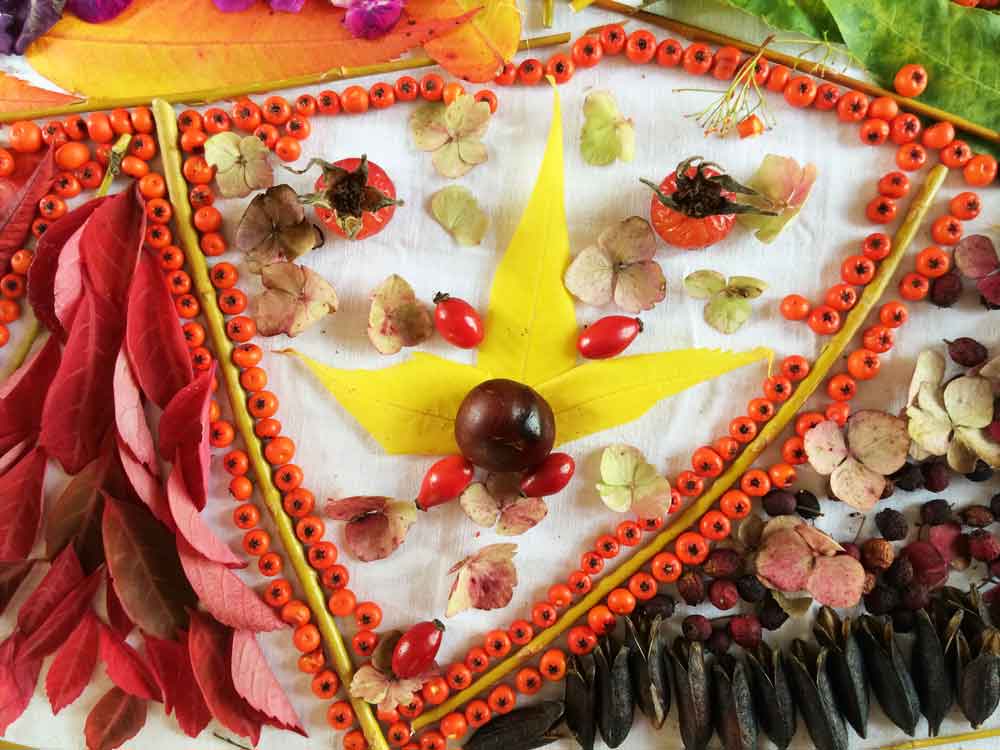 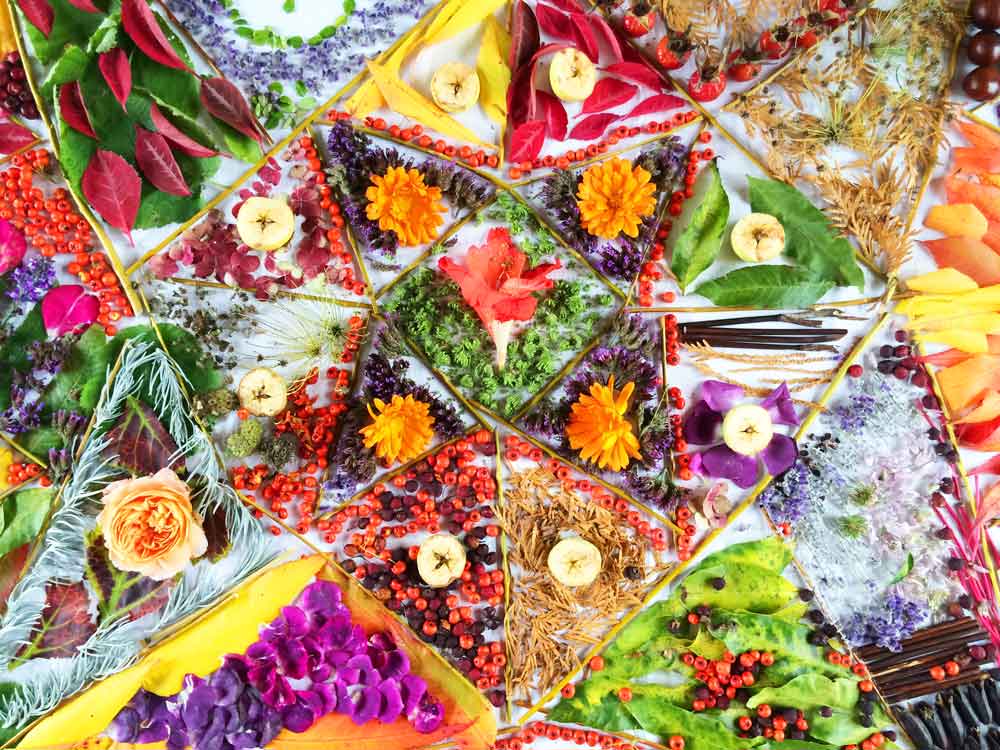 We had a lovely morning at Monnow Valley Arts this week making an Autumnal Mandala using foraged materials from the gardens. A small group of participants with Dementia came along to make this beautiful drawing inside the gallery whilst the storms raged outside. A little reticent at first, the participants selected their materials and got working on the drawing, and by the end were very impressed with the vibrant colours and textures in their work. A lovely group whom were great to make alongside and am looking forward to working with again. The mandala measured c. 3 feet in diameter and was outlined using yellow willow withies from the Memory Field. 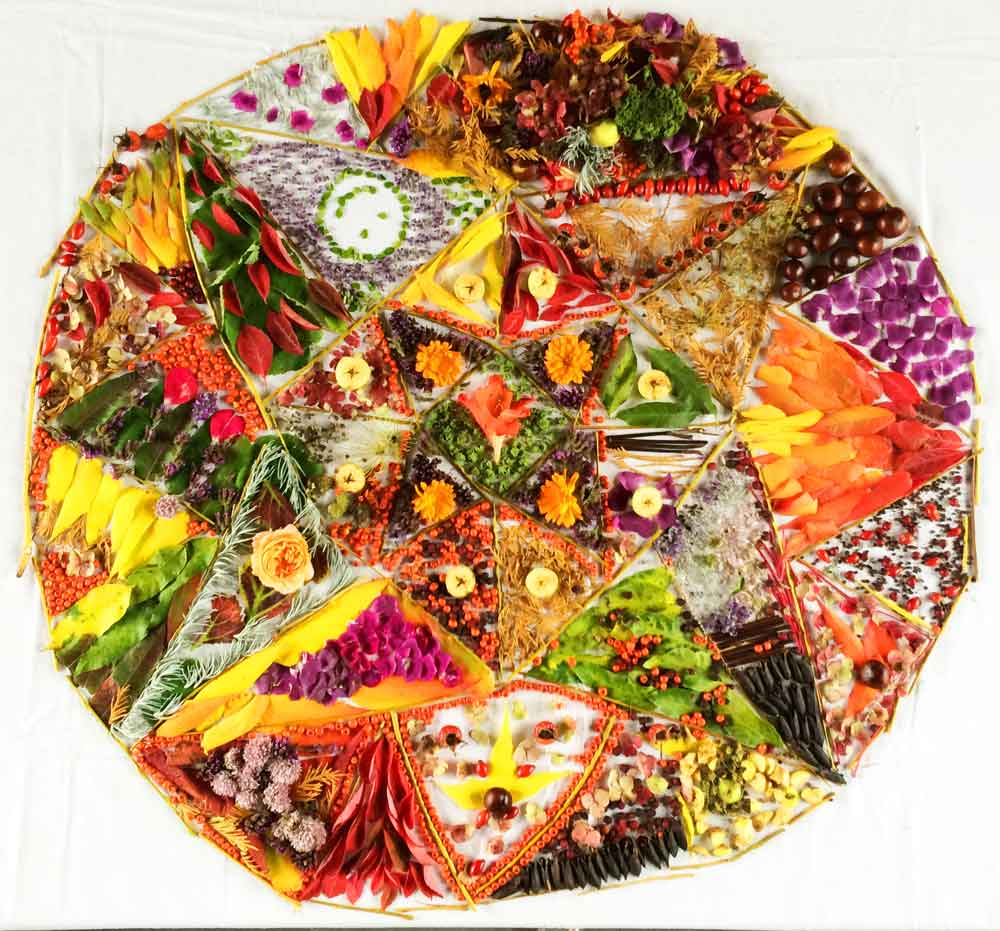 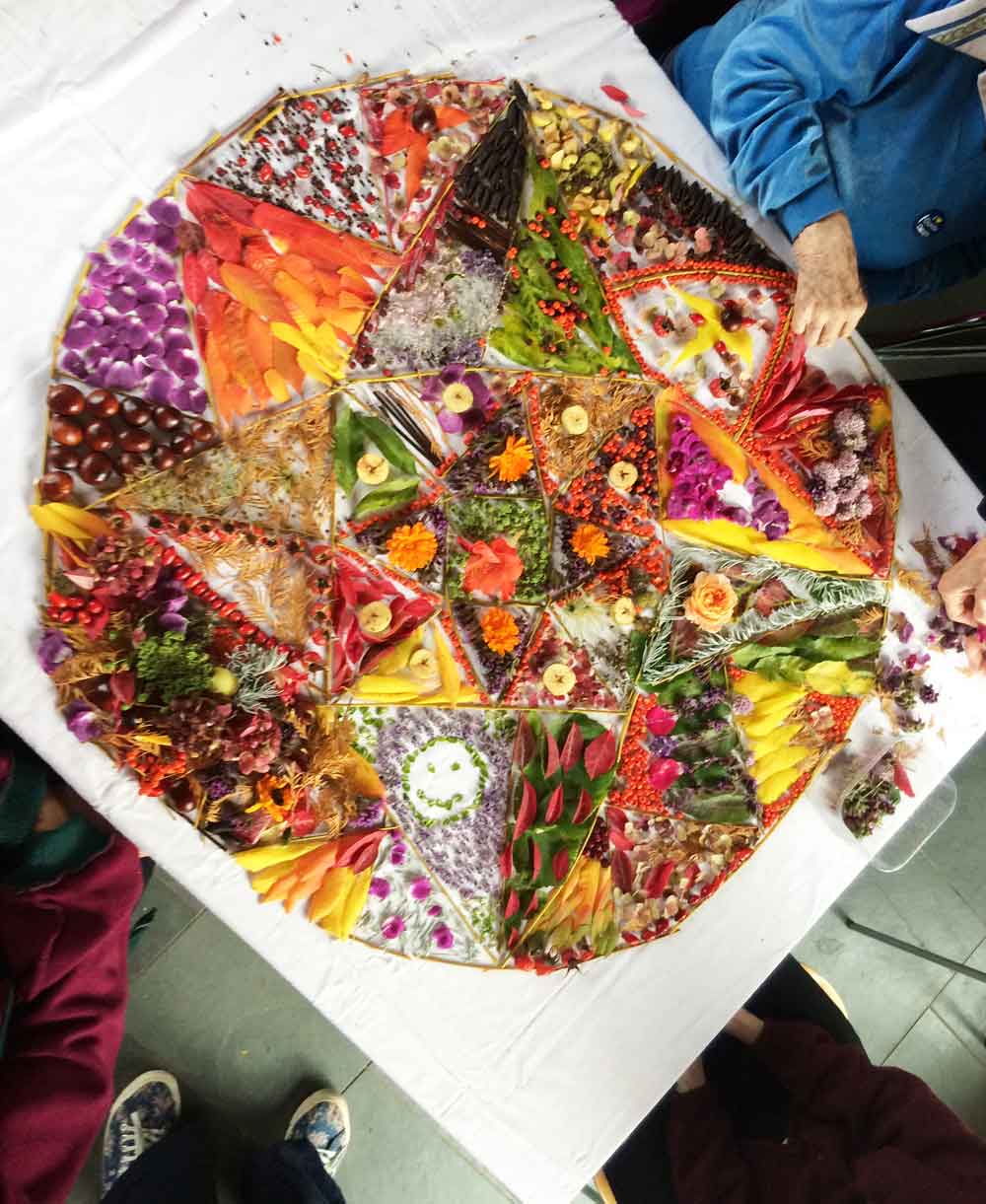 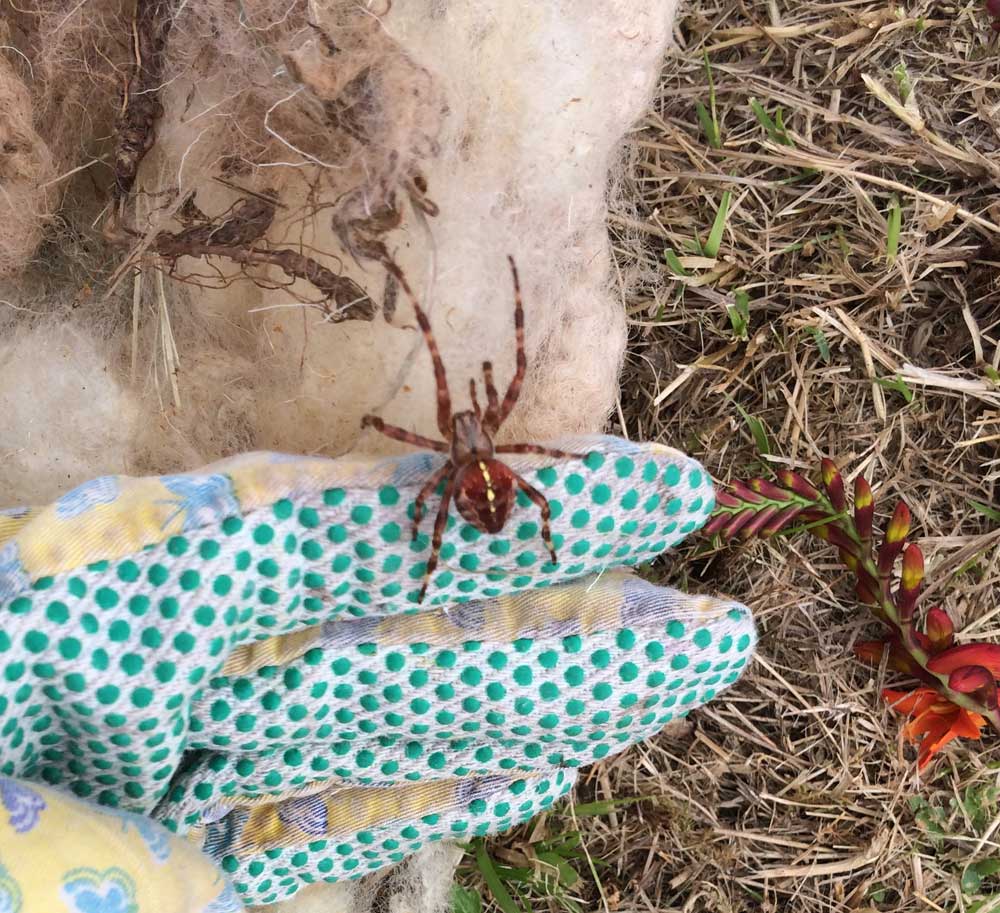 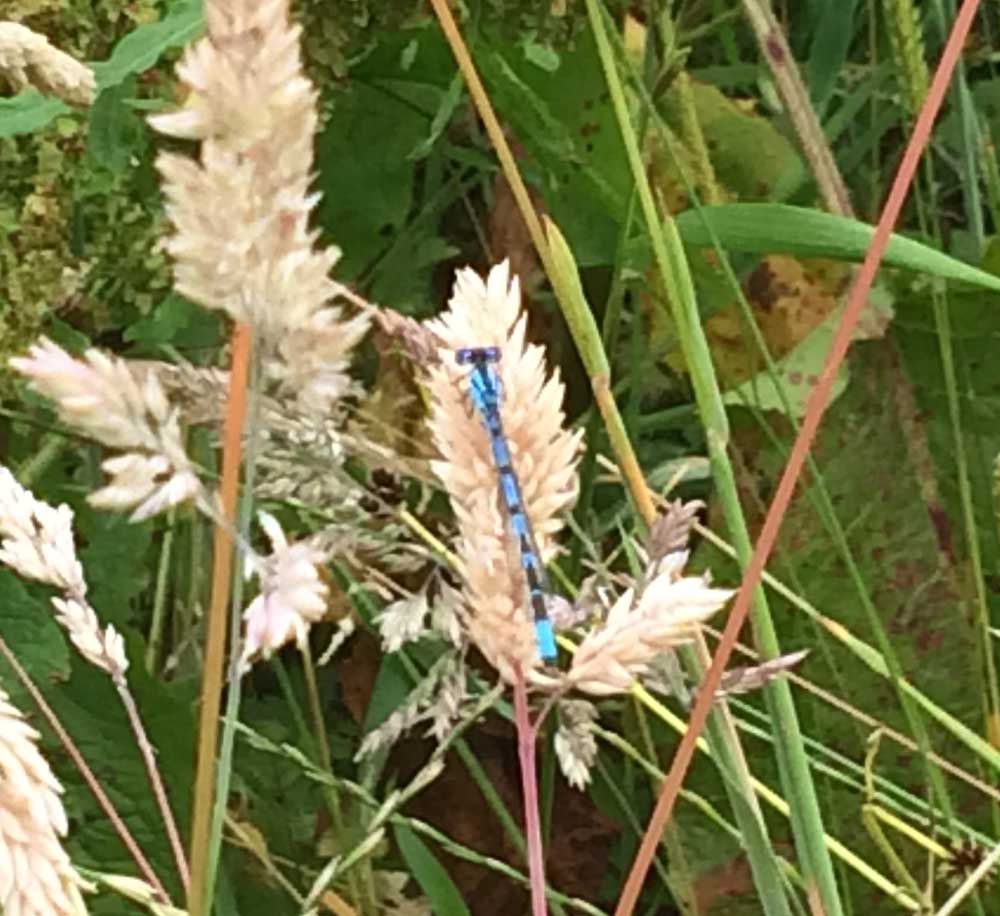 We are coming across some beautiful creatures at Ashvale during our creative play – so far the site has been inundated with beautiful blue damselflies and this week we stumbled across a stunning garden spider. 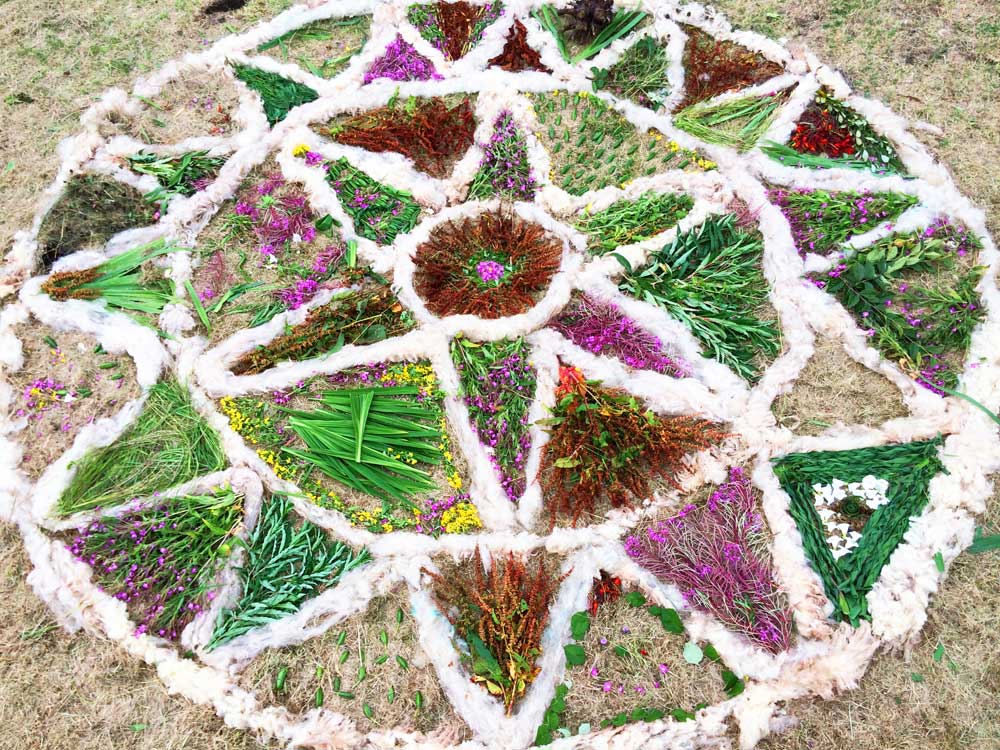 We made a lovely piece last Friday at the Arts and Minds Project in Ashvale. Thankfully the weather held until just as we de-camped and then the heavens opened. The children that came along did a fantastic job of making their drawing – with really stunning results – here are some images of what they made. It was a c.12ft diameter drawing outlined using sheeps fleece and filled in with foraged materials from ‘The Backs’ at Ashvale. 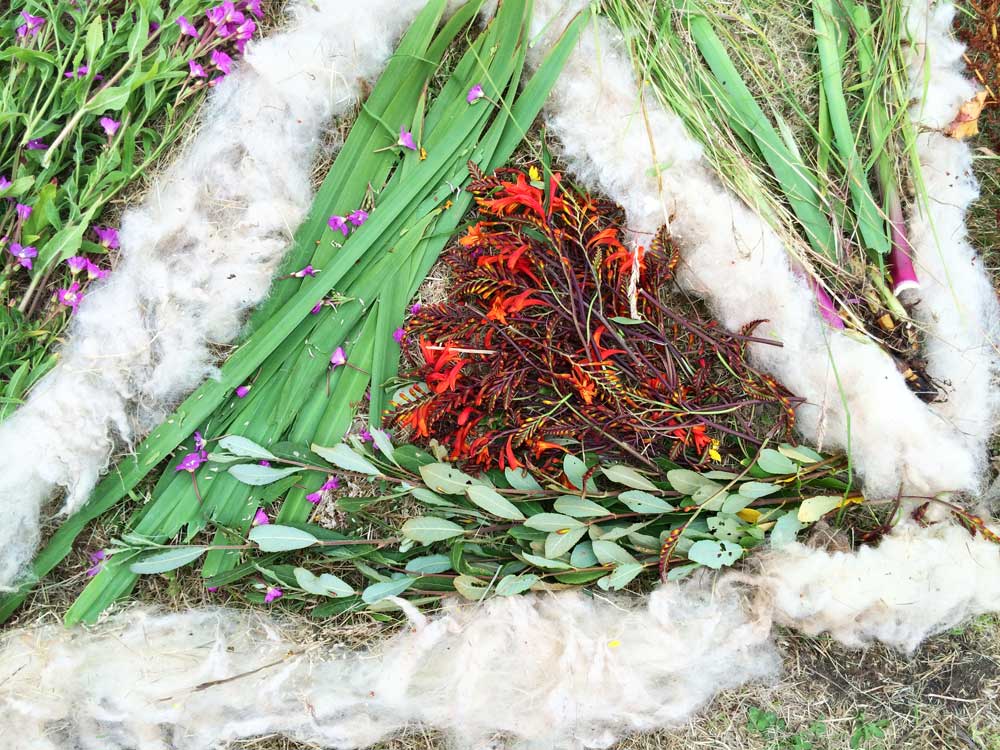 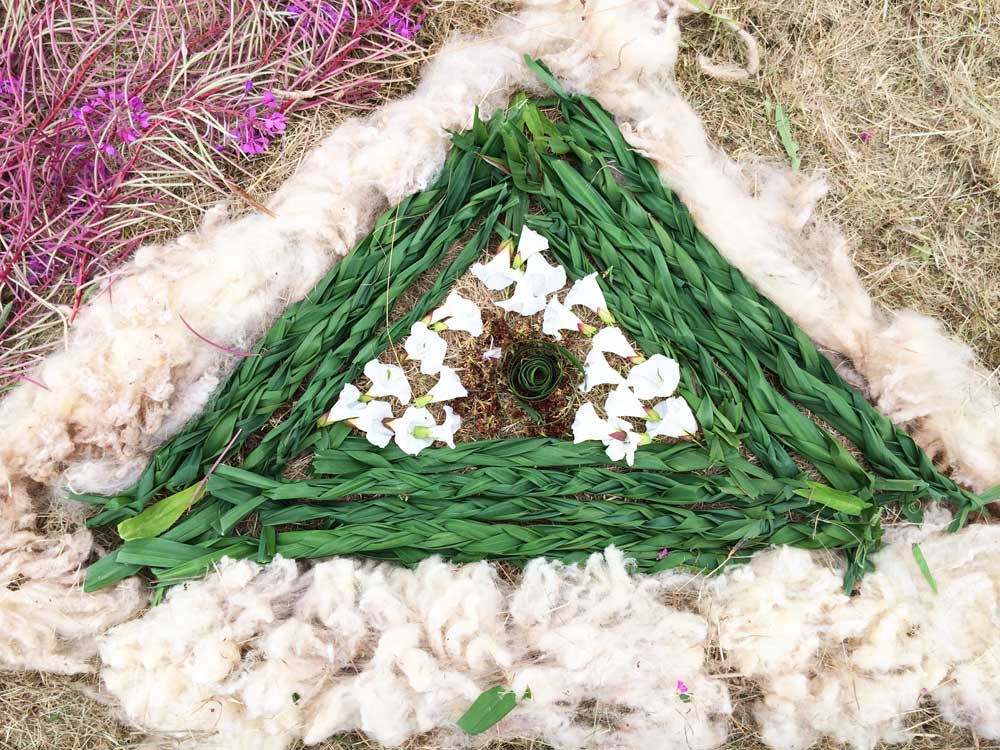 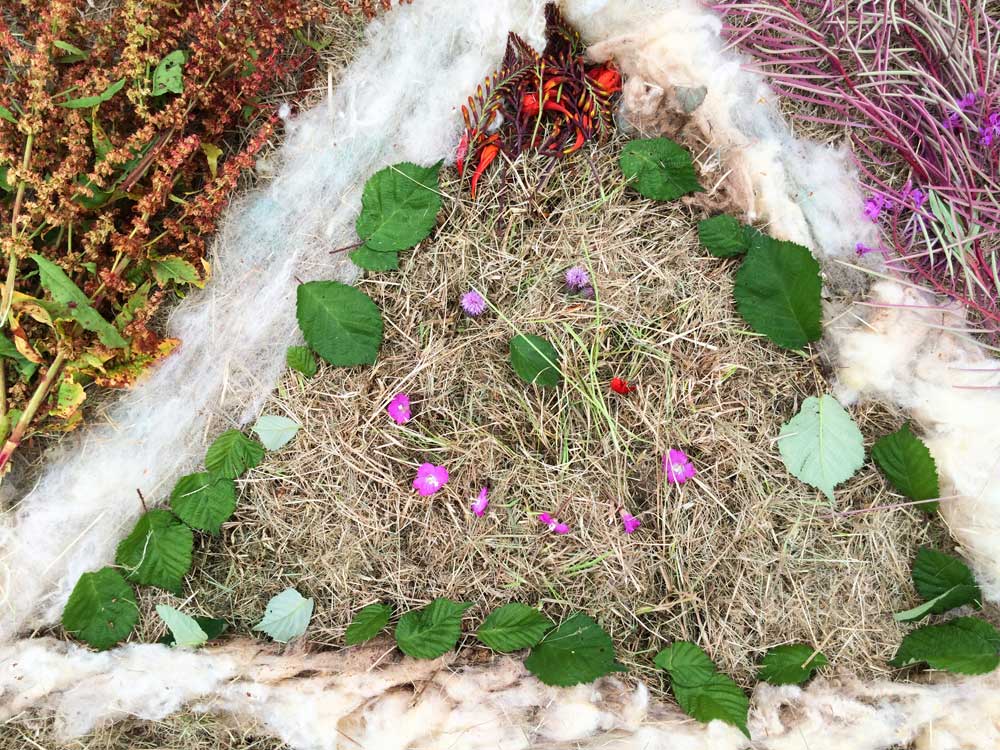